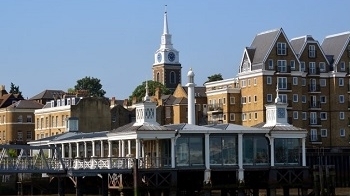 The artist, Fabric Lenny, makes colourful and playful images inspired by his love of the natural world and the desire to have fun.

“My work always involves other people. We sent kits containing art materials to local families so that they could design and sculpt animal characters for me to transform into an animation, which will be projected onto the entrance to the almost theatrical backdrop of the Town Pier.

“The pier is visible from a long way back and as people walk down the High Street to the riverside, the projection will transform from a colourful dot on the horizon and into a fun, colour-laden and watery visual tribute to the Owl and the Pussycat, as the audience gets closer.

“Come along and enjoy the fun.”

A few historic facts about the Town Pier:

Gravesend Town Pier is the oldest remaining cast iron pier in the world.

It was designed by William Tierney Clark and cost £8,700. The pier opened in 1834 and between 1835 and 1842 was used by 3.25 million passengers, but its importance as a hub with the North Kent Railway Line for steam packet services to London declined.

In June 2000, Gravesham Borough Council purchased the then dilapidated Town Pier from private hands and a restoration scheme began, finishing in 2002.

The pier remains in use today for the ferry and leisure cruises.